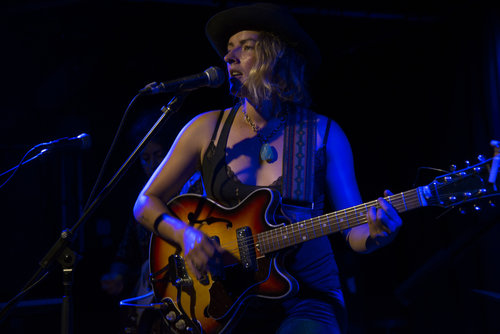 “Zoubi and The Sea are powerhouses with a laid-back, suave-jazz/punk-rock sound.”

“Within moments of hearing Zoubi and The Sea’s set, I was grabbed by their sound and stage presence. They filled the room with nothing but positive vibes. There was an infectious energy in the air while they were performing; something that is invaluable in the world of music! I look forward to seeing them go places.”

“Possibly the future of Canadian Music.”

What is a Zoubi? They are a quirky, quiet creature raised in the woods on Hornby Island, BC. Seeing much success with their 2016 fromed band in Victoria, BC, Zoubi and the Sea performed a multitude of West Coast music festivals and opened for Jon and Roy, Tara Lightfoot, Rising Appalachia, Fortune Killers and Carmanah. In 2017, Zoubi's unshakable passion for music brought them to Toronto, where they studied Independent Songwriting and Performance at Seneca College. A naturally magnetic performer, Zoubi plays finger-style guitar and engages with their audience emotionally while blending deep lyrics with simple, catchy melodies. Their live show is complete with charming anecdotes and when accompanied by the band, Zoubi and the Sea melds Feist-like folk-pop tones with a psychedelic feel and bouts of intensity. Off stage and on, Zoubi possesses an endearingly genuine creative spark that catches and holds your attention. In performance, the band showcases vulnerability as a strength and a bold silliness that translates as a punk rock attitude.

During their time living in Toronto, Zoubi formed a band and together they opened for Jesse Roper at the Dakota Tavern, as well as performances at Canadian Music Week, Nookfest, C’est What, Burdock Music Hall, The Revival Bar, The Supermarket, and Sneaky Dee's. Zoubi and the Sea continues to grow and rotate members as Zoubi ventures to new and exciting cities to make new connections. Montreal in 2018 was a hard start with COVID hitting but Zoubi began their Selkirk College studies online. Now, they live in Nelson, BC where they continue studies in Music Production and perform as a solo artist.